After a gruelling two years crossing the country, charting new territory Lewis & Clark, and the Corps of Discovery ended up in Oregon

Back in September 1803, US President Thomas Jefferson decided he ought to find out more about the territory he had just acquired for the United States as part of the Louisiana Purchase. You might have thought he’d have done his due diligence before buying but no – I guess there is not much come back when you are President for only a handful of years.

Anyway, Jefferson decided to recruit his trusty mates Meriweather Lewis and William Clark to lead an expedition up the Missouri River to chart the new territory and find a route to the Pacific Ocean. The assembled crew of 45 were known as the Corps of Discovery. They set out into uncharted waters and it was not an easy journey as they battled the elements, wild animals and had to forge relationships with the local Native American tribes they encountered along their route.

It was not until November 1805 that they first sighted the Pacific Ocean and they worked their way down the mighty Colombia River. Needing a bit of a break they decided to settle down for the winter in the woods just outside what is now Astoria on the North-Eastern tip of Oregon.

Unfortunately, in those days they didn’t have long term weather forecasts or good local knowledge. The poor old Corps of Discovery suffered a miserable winter in Oregon – they only had about one day when it didn’t rain during the 4 months they were there.

About Lewis and Clark National Monument

The Lewis and Clark National Monument is close to the mouth of the Columbia Rivier in North-Western Oregon and a few miles from the port city of Astoria. The main attractions here are:

Sadly, when we visited the visitor’s centre was closed due to the Covid-19 pandemic.

Sadly, the visitor centre was closed due to the Covid-19 pandemic so we had to satisfy ourselves with exploring the outside. Luckily, unlike the Corps, we had been blessed with splendid weather! The fort that Lewis and Clark had constructed was more of a wooden stockade to keep out wild creatures rather than marauding locals – it, of course, has not survived the passage of time in this wet climate.

Today, in its place sits a replica of what the National Park Service could construe from the diaries of Lewis and Clark. It is compact and cosy! During the season there are Rangers and volunteers who provide snippets of the travels of Lewis and Clark and what life would have been like at Fort Clatsop during those times. Life would have been tough and not helped by the incessant rain! They were made of tougher stuff in those days – I am pretty sure I would not last five minutes if I were catapulted back in time to be a member of the Corps.

The Fort itself is tiny and wandering in and out of the handful of rooms, even if you did it three times would only take about 10 minutes!

There are several trails that run through the park if you fancy a bit of a walk. The shortest of these take you down to the Netul River to the landing point that Lewis and Clark parked their canoes and wombled to the site where Fort Clatsop was erected. It is a pleasant wooded walk and not too strenuous.

If you fancy something more challenging then the 6.5 mile Fort To Sea Trail wends its way through the woods south of Fort Clatsop to Sunset Beach on the Pacific Ocean, forging through ancestral lands of the Clatsop Indians. Beware this is not a circular trail – so if you have not parked a vehicle at Sunset Beach you’ll have to walk another 6.5 miles back! Also, there are sections of the trail that are steep, going both uphill and downhill, sections of the trail that can be slick and muddy, and areas without much vegetative cover. 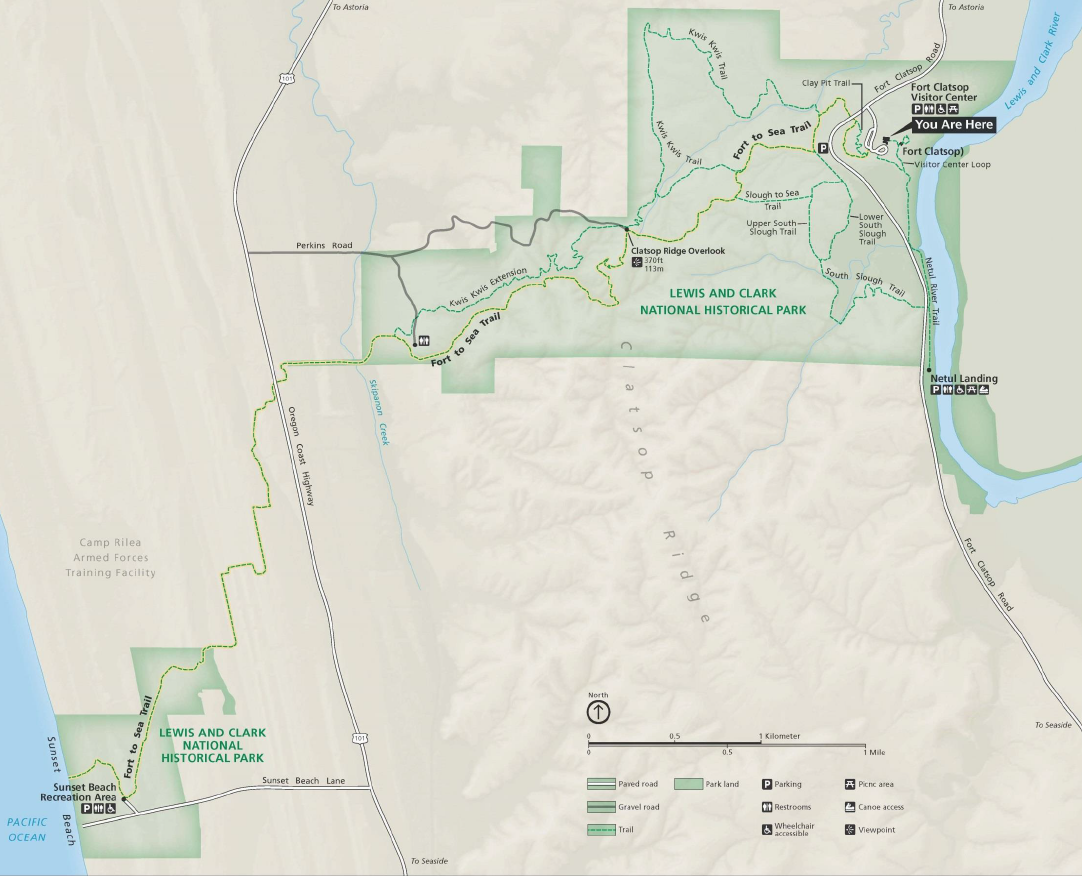 Idaho: Craters of the Moon

Book Review – Alive: The Story of the Andes Survivors by Piers Paul Read