After a few days of trudging around the hard pavements of cities, we felt the need to escape to the countryside and get some fresh air and slow down the pace of life somewhat. When most people think of the Czech Republic they think of Prague or the fairy tale town of Cesky Krumlov, the birthplace of Pilsen beer Plzen, or the spas of Karlovy Vary. But there is so much more see, and if you are a fan of the outdoors and want to experience some great hiking or biking then head for Bohemian Switzerland.

This sprawling National Park is home to verdant gulches, towering sandstone cliffs, peaceful swaths of farmland, quaint little villages, and majestic rock formations Bohemian Switzerland is a delight for all outdoor enthusiasts. As you might have guessed Bohemian Switzerland is NOT actually in Switzerland. It is a region in the north of the Czech Republic. You are probably thinking how did it get its name, well in the 1800’s two Swiss artists decided that a particular area in the north of the Bohemian Kingdom (now the Czech Republic) reminded them of their home country. They were sort of well known and their popularity resulted in the name sticking with the locals, thus the name was born.

The first stop on our Bohemian excursion were the Gorges of Kamenice, a deep and narrow mossy valley carved out of sandstone.

This is not an arduous or long hike, which starts in woodland and gently winds its way down to the river at the bottom of the gorge. From here the trail meanders for a mile or so alongside the banks of the lazy river, as moss and lichen coat the towering grey rock with verdant fuzz. Most of the trail can be hiked on foot, aside from two areas through which only a riverboat can go.

We clambered on to our little boat, for the short ride down the gorge (only a few hundred yards). The boat is powered by a man with a pole. He was no gondolier but was quite witty and told us some of the stories and history of the gorge. We glided gently over the dark shallow waters, past large slabs of rock encrusted with grey-green lichen, illuminated by the shards of light that had managed to find their way into the gorge. This a primordial eco-system that has escaped the ravages of man’s encroachment. 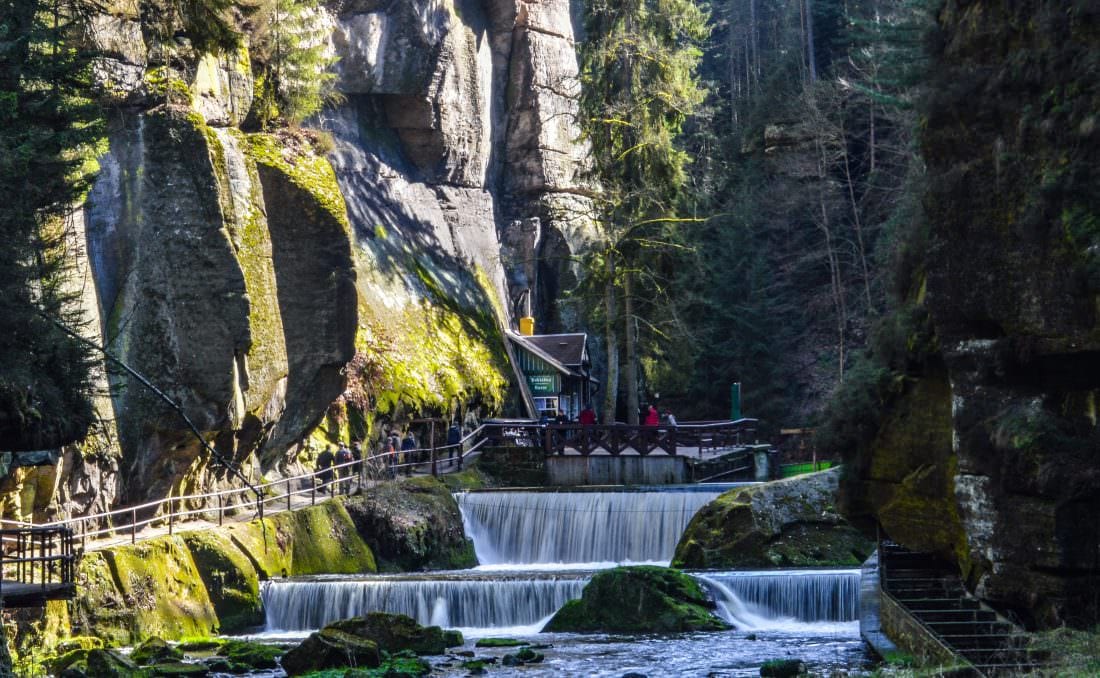 The gully teems with life; a fragrant lushness that makes you want to take a deep breath, and perhaps just sink into the stone. If only every day could start like this then I would be a happy man!

We hiked out of the gorge and stopped by the U Forta Hotel and Restaurant, one of only two such establishments within walking distance from the main trails in the park. U Forta serves an assortment of traditional Czech dishes, and many tasty beverages for hikers, bikers, and explorers to happily consume.

They even managed to arrange a vegan dish, which is a trend that we hope will gain traction in the Czech countryside. 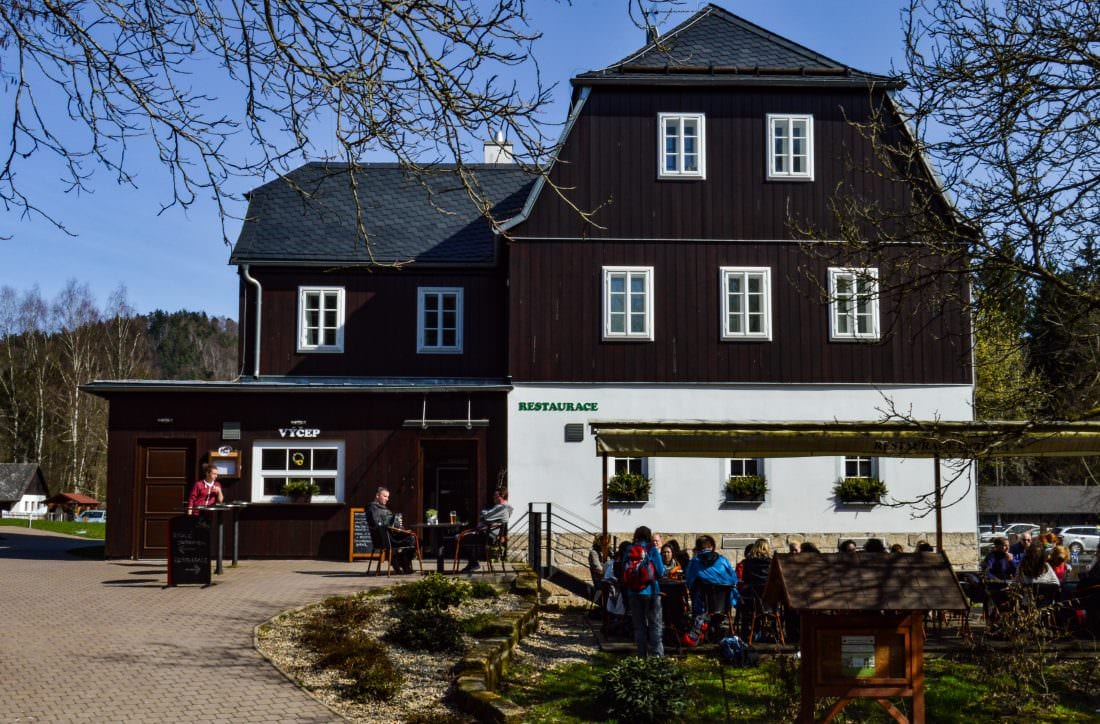 The second part of our tour took us a short distance from Bohemia Switzerland across the Czech-German border to its sister National Park, Saxon Switzerland. This park has two distinct areas but with limited time available our tour took us to the Bastei Bridge.

I had for some time wanted to come to the Saxon Switzerland National Park, and in particular, Bastei Bridge having seen numerous photos of it during my time thumbing through numerous travel blogs and websites. And finally, I was here!

Bastei Bridge is a bridge located in an area called Bastei. As we walked towards the Bastei Bridge, I could sense it before I saw it. I knew the bridge was hidden away in the forests and the rocks of Saxony but I didn’t realise how well concealed it was. The area is amazing beautiful. The most striking features are the towering grey sandstone boulders, known as Bastei rocks. From the here, you can look across towards deep-green forest and down onto the river Elbe, 200m below and the surrounding valley. Truly stunning.

Access to rocks was originally made possible with a staircase from below that was build in 1814. Wanting to make it even easier for tourists to explore the rock formation a wooden bridge was constructed in 1824, which was later replaced by the sandstone bridge we see today in 1851.

The name ‘Bastei’ comes from the word bastion, so it comes as no surprise that there’s the hollow ruin of Neurathen Castle at the Bastei Bridge, a castle that dates back to 1592. There is not much of the castle left to see but with a bit of imagination, you can imagine what it must have been like to live on this outcrop of rock. Defending it from invaders would have been fairly simple!

Getting around the area is made easier by a series of narrow metal walkways and stairs. If you suffer from bad vertigo this is probably not the place for you to visit.

Overall we loved our day tour from Prague to visit these National Parks. It was a pleasant respite from trekking around busy cities and a chance to recharge our batteries for the rest of the vacation. This was not a strenuous hike at all – we probably did less than 3 miles in total, much of which was flat – but we got to see some spectacular countryside and a different aspect of the Czech Republic.