A rare find in Missoula, Montana – despite the name Veera’s is not all about the doughnuts, there is also a selection of sandwiches and wraps

For those who live on the West Coast of the USA finding places that serve vegan options or have entirely vegan menus has become increasing easily easy. This is not the case in other areas of the country. On a recent road trip from Oregon to Minnesota, as vegans, we were on the lookout for places to eat along our route. So, using the trusty Happy Cow app on my mobile phone I discovered Veera’s Donuts in Missoula, Montana. I was never a big fan of doughnuts before we became vegan 3 years ago but we always feel the need to be supportive of cafes and restaurants that offer vegan food. The store is relatively new to the City, opening its doors in 2019. Veeras was the brainchild of Haniah Sweeney who had discovered the delight of vegan doughnuts during visits to Seattle and Portland and started selling her doughnuts in a local market and was finding they were flying off her stand.

Despite the COVID-19 lockdown, although travelling through Montana in July you’d hardly know it was happening as no one was wearing masks, Veeras was open. We were so pleased! If you don’t want to visit the store and you are in the vicinity of Missoula, I believe that Doordash will pick up your doughnuts and deliver them.

The interior design of the restaurant is clean and simple. The first thing that caught my eye was the display cabinet packed with delicious looking doughnuts. Before eating a doughnut we needed something a bit more savoury for our lunchtime snack. They had a small selection of vegan sandwiches and wraps to choose from. I am not sure if they do this lunchtime menu all year round or whether this just for the summer months – so I suggest calling ahead of time to check! 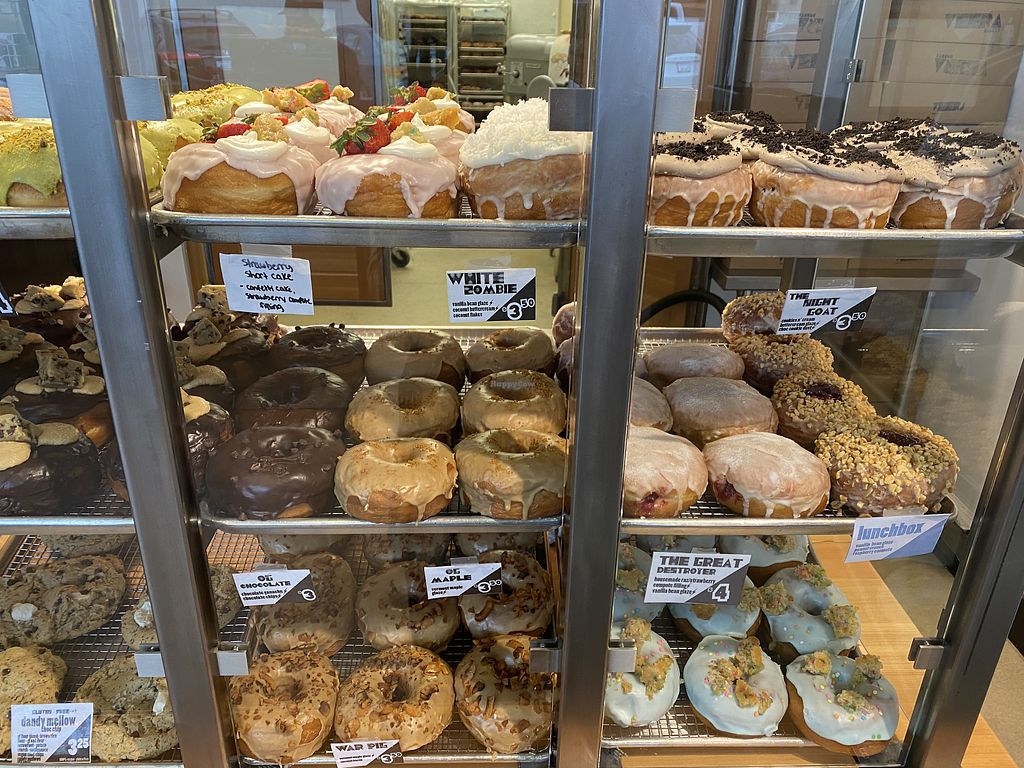 We were hungry when we arrived so we decided to order two of their entrees; the Veera Good Burger (based on the Impossible Foods burger) and a wrap. As usual, we split our meals to get a taste of both!

Overall the food tasted great and the doughnuts were amazing – even to a non-doughnut lover.

Oregon: Portland – Off The Griddle