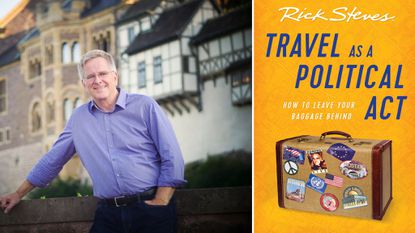 I have been watching Rick Steves travel shows on Public Television for several years. He comes across as a jovial chap and his shows are informative in a light and fluffy way. So, I was somewhat shocked when I recently caught one of his programmes entitled “Travel as a Political Act” where we used two developing countries; Guatemala and Ethiopia as a foil to cover a range of “political” topics from the impact of colonialism to global warming. You could have blown me down with a feather.

So, I thought I would explore my new found side of Rick Steves a little further only to discover that he’d been doing this, at least publically, since 2009 through books (Travel as a Political Act is now on its third edition), TV programmes and lectures. I realised I was late in the game in discovering this travel evangelist’s true political self.

Having seen the show I now wanted to check out the book!

Rick presents himself unapologetically as a liberal when it comes to his political beliefs but at the same time, he is an American patriot. Whilst he loves to travel he always is happy to return back to his native land. These beliefs run like a thread through his narrative as he weaves his way around discussions of hard and soft power, colonialism, the rise of political instabilities and popularism and many more. He deals with all of these topics in Rick-sort-of-way. None of the table banging and ranting of a John Oliver, his approach is calming and soothing more like an affable uncle giving you advice. His tone is optimistic rather than an apocalyptic doom merchant.

This book is not intended to be a purely political commentary it is about travel at the end of the day. He tries to show how travel can be used to broaden your mind and perspective about others. It is all too easy to sit in the comfort of your armchair and have your mind filled with images and stories on immigrants, religious extremism and political malfeasance around the world (and at home). Rick Steves, suggests that travel can help us understand these complex issues from another and better-informed perspective. Having done a lot of travelling myself I cannot disagree.

For most experienced travellers “Travel as a Political Act” is not going to bring many inciteful moments. Most might find it a little too folksy but also a reminder of the journey they have taken. The book is most useful to those who have yet to take on board travelling – especially if their experiences to date have been sitting on a beach or around a pool in a resort on Mexico’s Riviera Maya.

Don’t expect in-depth political analysis from this book, but for someone who is thinking about travel as a way to broaden their perspective, Rick Steves does a good job on sharing how travel has changed his life and could change theirs

Book Review – Alive: The Story of the Andes Survivors by Piers Paul Read

Italy: Rome – A 3 Day Itinerary for the Eternal City