Touring the attractions around Sri Lanka’s south-west coast including river safaris, a sea turtle hatchery, a tsunami memorial and a gemstone mine.

We had the chance to spend a day exploring the beach towns and attractions north of Galle along Sri Lanka’s south-west coast. The larger resort towns include Hikkaduwa, which is 22km north of Galle (30-minute drive) and Ambalangoda which is 35km away (about 50-minutes).

A shaft of moonstone mine

Sri Lanka is well known for its precious and semi-precious gemstones and no gem is more associated with the country than the moonstone. Moonstone can occur in several colours, but there’s only one place in the whole world that produces the exquisite blue moonstone—Meetiyagoda in southwest Sri Lanka. In fact, Sri Lanka was so associated with this mysterious gem that moonstone used to go by the name Ceylon opal.

Gemstone mining in Sri Lanka is still primitive with the mines being very shallow and dug largely by hand. The shafts are narrow and claustrophobic and must be incredibly unpleasant workplaces in the hot and humid climate of Sri Lanka.

The gemstone mine at Meetiyagoda (about halfway between Ambalangoda and Hikkaduwa) is open for visitors. The tour starts by peering down a very narrow mine shaft – not much to see here followed by looking at how the mined stones are cleaned.

Next up is the workshop where the stones are polished, cut and put into their settings for earrings, necklaces and other jewellery.

The main purpose here, of course, is to sell you something so the tour ends in a large showroom. They want you to buy jewellery but it is not compulsory and they are not too pushy. We were not interested in buying anything so we politely thanked our guide and moved on. Mask making has been a popular tradition in Sri Lanka. Many Sri Lankan mask artisans ply their trade along the Western, South Western and Southern coasts of the island. Of these, the Ambalangoda area is renowned for its talented artisans.

Ariyapala and Sons, a 5 generation family business, is an important landmark in the town of Ambalangoda and is the best place to get your fill of Sri Lankan mask lore. With the disappearance of the traditional beliefs that form the basis of the Sanni Yakuma (devil dance) the Sri Lankan traditional mask culture has practically disappeared. Once treasured by museums and private collectors, mask carving is on the decline with the only remaining activity being a cottage industry focused on tourism. 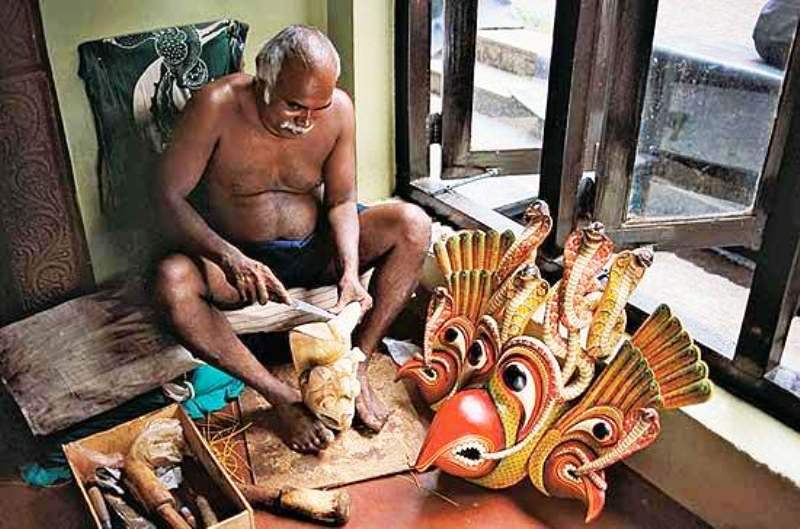 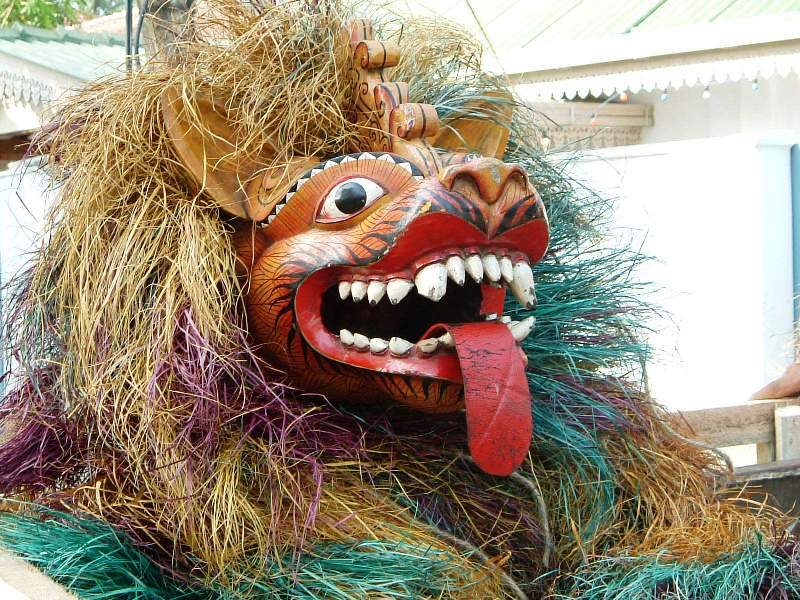 We were still reeling a bit from our horrible whale tour a couple of days earlier but we thought we jump back into taking a different type of water tour on the Madu River. The river is a short one, originating in the Galle district, but opens up into the Madu Ganga Lake at Balapitiya before spilling into the Indian Ocean.

We set off on our river safari from our of the outlets into the ocean. Here the river has narrowed once again and is lined with dense trees that are home to birds and mammals including monkeys. This is a great place to observe some wildlife as you gently meander along the watercourse towards the Madu Ganga Lake.

Along the way, we passed by some shrimp traps – the estuary area of the lake is very rich in shrimps. The entrepreneurial fishermen also offer passing tourists to dip their toes into some tanks with small fish that nibble away at the dead skin on your feet. We have undergone this torture before – which was actually enjoyable even if you are like me and have ticklish feet! On this occasion, we were pressed for time so we passed on the opportunity.

It was very relaxing to cruise from the rivers onto the open lake where there were locals fishing on the lake in outrigger canoes and plenty of passing birds to look out for.

Around the lake, there are several islands, some of them large enough to be inhabited. There are no bridges so they are only accessible by boat. As the water in this estuary is brackish you will also find mangroves growing on some of the islands.

We were lucky enough to visit one such island where they grow and process Sri Lankan cinnamon sticks. Generally, we are not huge fans of cinnamon as it seems to pervade pretty much everything in the US (which we struggled to come to terms with when we came to live here … nearly 20 years ago!) We were given a presentation how the cinnamon is cultivated, harvested and prepared – basically a whole lot of work and skill is required. Of course, having enjoyed the demonstration we felt somewhat obliged to buy some cinnamon which we did – as I said we are not the biggest fans of cinnamon but there is something very different about the cinnamon produced in Sri Lanka so we were quite happy.

It was soon time to be heading back, which was just in time to avoid the incoming weather. Nonetheless, there were still things to see along the way including some temples that had been beautifully set among the jungle lining the lake.

A short distance from Madu Ganga is the Galbokka Sea Turtle Hatchery which is somewhere that I had included on our wish list of places to see in Sri Lanka. We have been lucky enough to see these amazing creatures in the wild – and also sadly in rescue centres.

The entrance to Hatchery is a large fibreglass turtle through which you pass into its gaping beak to enter. This and the large crab offer some great Instagram photo opportunities.

As you pass through the giant sea turtles jaws you come into a small aquarium where there are few examples of local sea life in large tanks including eels and lobsters.

Beyond the aquarium is an outdoor area where there is a large area which resembles a beach. Staff from the hatchery go out and collect sea turtle eggs from the beaches and carefully burying these eggs in the safe area inside the hatchery. There are quite a few species of sea turtles native to the area including Olive Ridley, Leatherback and Hawksbill, which are all hatched here. Once the eggs hatch the baby turtles are put into tanks to grow a little before they are released back into the wild – which significantly increases their chances of survival.

Baby sea turtles in a tank

As well as hatching sea turtles the Galbokka Sea Turtle Hatchery also rescues full-grown sea turtles and there are other tanks with large turtles, many of who have been injured by boats, fishing nets etc.

This Buddha statue was opened on the 26th of December 2006 at Paraliya as a memorial to the over 35,000 Sri Lankans killed by the tsunami on the 26th December 2004. This statue is an exact replica of the 5th Century 175 feet Barmiyan Buddha Statue destroyed by the Muslim Fundamentalists in Afghanistan. As well as the statue there is a small museum that has photographs taken after the tsunami.