World’s End in Horton Plains National Park is one of the top tourist destinations in the central highlands of Sri Lanka, featuring a 4,000′ drop and breathtaking views of tea plantations and the Indian Ocean some 50 miles away.

The park itself sits on the southern plateau of the central highlands with an average elevation of between 6,900 and 7,500 feet and has incredible biodiversity with many plants and animals that can’t be found anywhere else in the world.

Taking the journey to Horton Plains National Park for a hike is one of the most popular excursions to take from Nuwara Eliya. It takes about an hour from Nuwara Eliya to reach the National Park. There is no public transport, so you will need to arrange your own transportation. You could take a long and uncomfortable ride on a tuk-tuk or, alternatively, you could get your hotel or hostel to organize some local transport that will be a lot easier on your nerves and backside! Luckily, we were doing this as part of our tour and our guide had arranged for us to be picked up by a man with a 4-by-4 vehicle.

Before setting out you need to know that Horton Plains National Park is a plastic-free zone. They check your belongings and remove plastic bags, covers, wraps from your food to make sure that the park does not get polluted. This also applies to plastic water bottles, so take your water in a reusable container (you will need water). They do give out brown paper bags to transfer your things into but it is best to plan ahead and not rely on this!

Our pick-up was scheduled for 5:30 am which was a bit of a shock to the system as we had got used to our days starting at 8:30 am the earliest. It is also really cold in the morning in Sri Lanka’s hill country – so we layered up with whatever clothing we had with us that had any thermal preservation qualities. Another thing was that we were leaving before the hotel was serving breakfast, but they kindly made us a pack-up to take with us. I think it was a cheese and onion sandwich – my taste buds had yet to wake and confirm what I was putting into my mouth – which was not exactly on our vegan list of foods, but we tend to relax our dietary preferences when we travel.

The vehicle was a bit beat-up and needed some attention to the suspension system, but luckily we were not doing much off-roading this day. The driver fancied himself a bit of a Formula One racer as he undertook some daring passing manoeuvres along the way. The drive is not too long but the roads get very winding towards the end and we got stuck behind a bus which had trouble getting around some of the hairpin bends. As we neared the park we were treated to the most amazing sunrise. I cannot recall ever seeing such a bright red sky in all my life. Sadly, our driver did not seem inclined to stop as we were in a long, snaking caravan of vehicles making their way to the park.

Once we got to the park we had to park up and wait for our driver to get tickets. This takes a little time as all the buses, jeeps and tuk-tuks arrive pretty much at the same time. This gave us the opportunity to jump out, stretch our legs and use the bathrooms, which are a bit primitive and are largely open to the elements. Keeps the smell down at least!

From the ticket office, it is another 5 miles or so to the main visitors centre and the start of the trail. We managed to arrive before the crowds of fellow trippers, so we didn’t waste any time getting on the trail and headed out at a good clip to stay ahead of those coming behind us.

The trail is a 6 miles (9.5km) loop with stops that cover World’s End and Baker Falls. It takes a good 3 to 5 hours to complete, depending on how long you stop at each viewpoint. The hike is relatively easy with rolling hills. If you go during the rainy season – we were there towards to end the season – it can be a bit boggy in places. 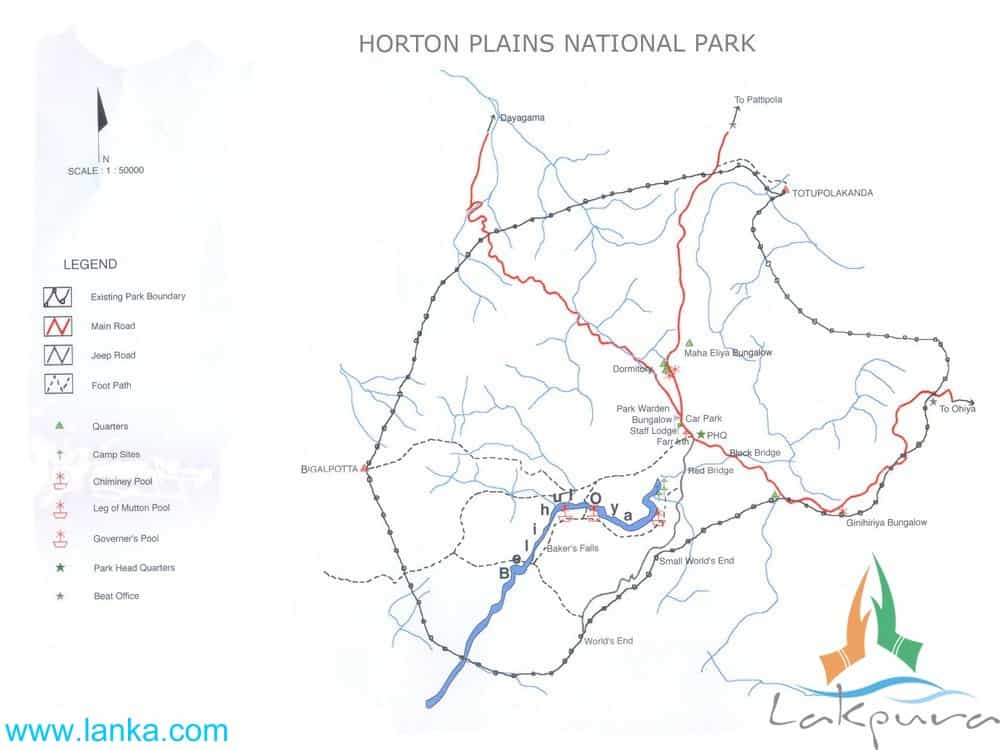 The first part of the trail is flat and takes you along a well-worn path. The terrain here is open and slightly undulating and offers pleasant views across the plains. After about three-quarters of a mile the path the splits, and on the advice of our driver, we took the left fork.

After a little while, you leave the plains and enter into a densely forested area. Here the path gets rockier and bit more treacherous so you need to be more careful about your footing. There were also some areas that were quite boggy. In the drier seasons, this is probably okay.

The first viewpoint we came across was the Small World’s End, which has some great views and is a foretaste of what is to come. From here you can continue around the trail that skirts the ridgeline to World’s End or you can take the slightly more challenging trail that follows the top of the ridgeline all the way to World’s End, giving you rare solitude and unparalleled views of the valley below.

It another mile or so before you reach the World’s End viewpoint. The dense forest clears for a bit and provides some lovely views back across the National Park. Eventually, we reached the World’s End which is easy to recognise as there is a large green sign telling you as much. The views are outstanding and we spent some time taking some photos. It is a great place for those Instagram shots. At this point, we were glad to have arrived early and beaten the crowds as we only had to wait a few minutes for one greedy couple to move on. We were then able to get our unobstructed photos in peace and quiet.

From World’s End, the trail opens up again to a set of rolling hills and valleys which were very pleasant to walk along. After a couple of miles, you reach Baker Falls. Here there are a few more trees which give some protection from the sun, which we welcomed as the heat of the day was starting to build despite it being only mid-morning.

Along the route back to the park entrance there are small pools, streams and wide-open spaces to enjoy. At the visitors centre, there is a small exhibition that explains the history and ecology of the National Park. We finished our hike in about 3 hours and were back in Nuwara Eliya well in time to catch our lunchtime train to Ella.

Pretty much any month is a good time to visit Horton Plains. However, December through March tends to be on a more pleasant as the weather is a little less hot and sticky. It is probably best to avoid the monsoon season that runs from April to August – although you can expect rain any time of the year so take a waterproof with you!

It’s possible to do camping at Horton Plains National Park. On the first Monday of every month, the park officials give out campsite reservations. Ask around at the hotel or hostel to see if you can secure a spot.

Film Review: The Bikes of Wrath

Oregon: Astoria – the gateway to the Columbia River