We departed our hotel in Tissamaharama and headed for the south coast of Sri Lanka, which would be our first glimpse of the ocean for over a week. Our next destination was the small town of Unawatuna on the southwest coast of the country, close to the city of Galle. This is where we’d be staying the next few nights, and be celebrating the arrival of 2020.

Along the way, we pulled in to take some pictures of the iconic stilt fishermen. I think everyone who has ever visited Sri Lanka has taken a photo of these fishermen. This is not the ancient tradition that this simple fishing method might suggest, it only dates back 70 years to World War II when this practice was adopted by desperate people who were short of food and challenged by overcrowded fishing spots.

Today, the stilt fisherman are mainly there for the tourists, expecting a small donation if you want to take their pictures. Recent tsunamis have destroyed parts of this coastline and impacted the fishing grounds, so it is impossible for fisherman using these primitive techniques to catch enough fish to make a living. Some of the folks sitting on these stilts are not actually fishermen or if they are they are not really trying to catch fish.

Of course, we had to take some photos and pay for our donation.

There are a number of small towns along the southwest coast of Sri Lanka, which have not surprisingly been turned over to satisfying the needs of tourists. We passed through several of these and as we travelled through the beach town of Weligama our eyes were drawn to a vegan ice cream cart standing close by the surfer beach. We simply had to stop! Cruising Smoothly serves dairy-free takeaway ice cream made of frozen bananas and topped with toasted coconut and caramelised lentils with seasonal fruit. There are several different flavour options and the ice cream is served in coconut shells, so no single-use plastic is used. A perfect pit-stop on a hot day. 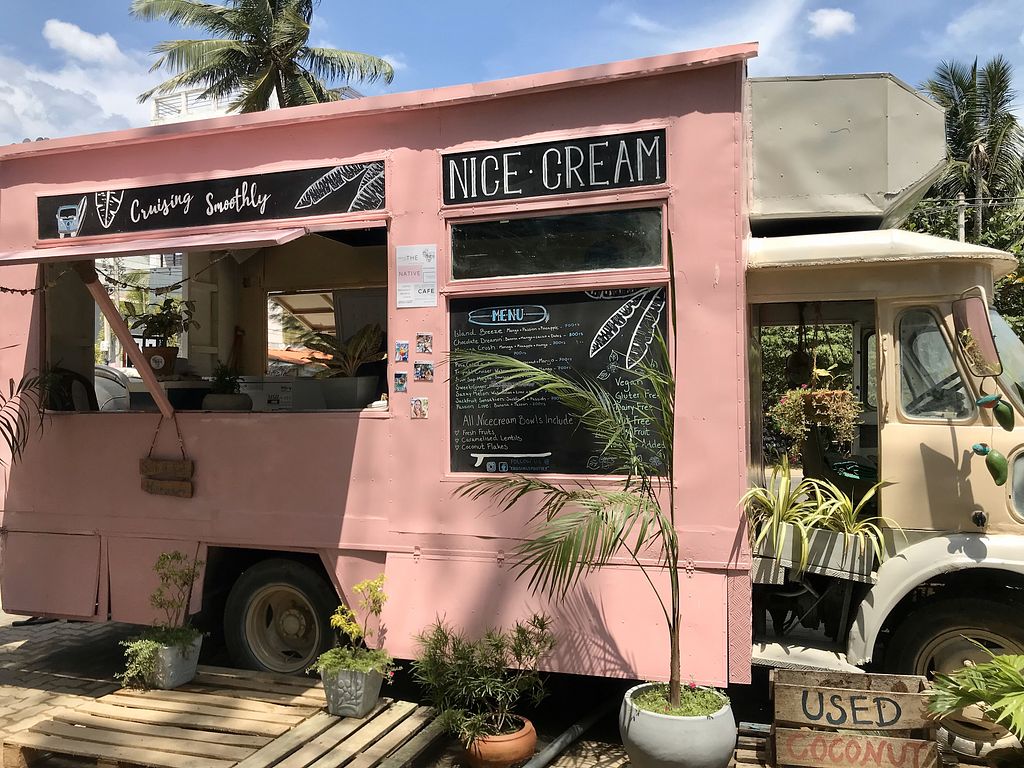 After a quick stop at our hotel in Unawatuna to drop off our bags, we headed off to visit Galle Fort the main tourist attraction in the city of Galle. Galle Fort is a fortified old city founded by Portuguese colonists in the 16th century. It is a UNESCO world heritage site and is an evocative reminder of Sri Lanka’s role in the colonial Indian Ocean spice trade. The fort is built on a promontory surrounded on three sides by the sea.

We parked up just outside the walls close to one of the gates. The streets of Galle Fort are free of cars which for us was a delightful respite from the craziness of Sri Lankan drivers. Our parking spot was right next to the National Maritime Archaeology Museum which was not our schedule for a visit today!

Our first stop in the Fort were the two churches that date back to colonial times.

The Groote Kerk or Dutch Reformed Church is situated near the entrance to the Fort. The church was built by the Dutch in 1755 and is one of the oldest Protestant churches still in use in the country. The original foundations were laid in 1684 but it was not until 1755 that money was donated to complete the construction.

The building of an Anglican Church in Galle Fort was the idea of the first Bishop of Colombo. The foundation of the church was laid on 30 October 1868 and it was not consecrated until 1871. The design of the church is typical of Anglican Churches with its simplistic exterior and interior features, which I liked a lot, especially with all the Christmas decorations up.

In between the two churches, is the old post office, which has sadly fallen into disrepair. In recent years the building has become a health and safety issue with part of the wall actually collapsing into the street. Luckily, no one got hurt.

It sounds like there is not enough money to complete the refurbishment, so despite the building being protected it is going to be just a ruin of its former self for some time to come.

A skip, hop and jump from the churches is one of the most recognisable features of the Fort; the clock tower. This four-storey (25.3 m (83 ft)) tall stone monument dates from the late 19th Century. It was built within the ramparts of the Galle Fort on the site of the previous guardroom, overlooking one of the three bastions of the fort.

The clock tower was built in recognition of the services of renowned Colonial Surgeon Dr Antonisz, who was also a representative of the Legislative Council. The tower construction was funded through public subscription through the people of Galle.

I was also delighted that from the ramparts close to the clock tower you get a perfect view of the Galle cricket ground, which hosts international test matches. I made a mental note to come back when Sri Lanka are playing a test match.

This was also a good time to reflect on the devastating tsunami that hit this part of the coast back on 26th December 2004 – almost 15 years to the day of our visit. Despite the epicentre of the earthquake that caused the tsunami being 1600 km away it created a massive body of water that swept 5 km inland, killing 40,000 people and displacing 2.5 million. It is hard to contemplate such destruction and loss of life, especially looking today across to one of the areas of Sri Lanka that had been impacted the most.

The walls around Galle Fort still remain in good condition so it is easy enough to walk around the outside and enjoy the residential areas protected by the sturdy seawall. Of course, there are plenty of touristy shops, bars and restaurants to choose from. As you wander along the wall you get to look out to the Indian ocean, and if you look down at the waters lapping up against the walls you might be lucky enough to a sea turtle.

Another important landmark on the Galle Fort promontory is the lighthouse, the oldest in Sri Lanka, which stands at 26.5 metres (87 ft). The lighthouse was built by the British in 1848 and performed sterling duty with its only interruption being from a fire in 1936.

Just across from the lighthouse is the impressive white building, the Meeran Jumma Masjid, a mosque.

We had a wonderful time visiting Galle Fort and it is a great place to spend a few hours exploring.

Book Review – Into Thin Air: A Personal Account of the Mount Everest Disaster by John Krakauer

Italy: Rome – A 3 Day Itinerary for the Eternal City