Since moving to Oregon several years ago we had long talked about visiting John Day Fossil Beds National Monument but had never managed to get our act together. So, finally, we bit the bullet and planned a trip, staying for a couple of nights in the small town of Dayville.

The name of this National Monument derives from the John Day River, which passes through on its way to the Columbia River in the north. There is also a town called John Day in the area (I am not suggesting a lack of imagination here but honestly what happened to creativity. More on this later!)  Apparently, John Day was from Virginia and was a member of an expedition led by Jacob Astor in 1811. The nice thing about US history is that there is not much of it and what there is, is pleasantly ordinary. There is no better example of this ordinariness than the abundance of roadside pull-ins with a historical marker, commemorating events that have shaped the American nation, such as “Abraham Lincoln passed by here and took a dump in this spot during which time he composed the Emancipation Proclamation”. Things are even more desperate in the Western United States where there is even less history – they have invented “geographical markers”. Here you can stop and read about such geological wonders as petrified, prehistoric mud casts formed by worms who were forced out of the ground by a flood of urine from a passing herd of diplodocus.

Coming back to John Day National Monument, which turns out to be very interesting … if you are a geologist or just like a nice rock formation. It is located in three areas which they call “units”. They are fairly spread out but luckily for us, two are along the very highway we are travelling. The Painted Hill units are close to the town (blink and you will miss it) of Mitchell.

We loved this place. The hills are smooth, worn and patterned with lines of red, white, black and a hint of green. It was close to sunset when we arrived so the red of the hills really ‘popped’ in the soft evening light. It was still stinking hot so we took only a few steps from the car to snap the wonders of the Painted Hills. It was soon time to move on and go to our destination for the night, the Fish House Inn at Dayville. The Fish House Inn has a country feel to it and it was lovely to see several generations of the owner’s family socializing together when we arrived – it made us somewhat jealous. We were shown to our small room in one of the cabins, which was cute but dated with not very good air conditioning … and yes it was toasty … so our first night’s sleep was somewhat fitful.

We began day two of our Eastern Oregon tour with breakfast at the Dayville Café. As you might expect in a town of 150 the options for places to eat are fairly limited and the next town is some 30 miles away. Luckily the Dayville Café turned out to be a delight and the food was excellent. As usual, we couldn’t easily choose what we wanted so Karen and I split two breakfasts between us. Once we finished and were preparing to pay we got into a discussion with the only other patrons who had decided to sit inside on this sunny, warm morning in August. Initially, I thought the chap was a passing geriatric Hells Angel as he sported a long grey beard. This was after all a popular watering hole for travelling bikers! He turned out to be a pastor from Nevada travelling through Oregon with his wife … just goes to show how first impressions can be off the mark.

Our plan for the day was to do some hiking out in the Sheep Rock Unit of the John Day National Monument. So, before setting out we crossed the street to the Dayville Mercantile to stock up on provisions for our trek. I just love the word “mercantile” reminds me of Little House on Prairie with the Olson family and the awful and disagreeable Nelly Olson with those ugly, tightly curled ponytails. This store was amazing – it had everything from hunting knives to Barbie dolls. The current owners have only been in charge for a couple of years have decided to swap the relatively high pace of Portland for the snail-like Dayville. At the weekends they follow the Western theme of the town and dress up in 19th Century western clothing – very quaint!

Today, promised to be a hot one so we stocked up with water and headed off to an area of the Sheep Rock Unit called the Blue Basin. We had scouted this the night before and decided to take the longer hike, which was supposedly about 3 ½ miles long with an 800-foot elevation climb somewhere in the mix. Out in this part of Oregon, it is really arid and in the summers it gets hot and there is little shade.

The trail was initially quite flat but then started to climb up a gulch. We caught up with a party of three women who didn’t look so well prepared for the conditions – but they were game. At the end of the gulch, there were a number of switchbacks that took us up several hundred feet to the top of a ridge which provided spectacular views across the valleys below. It was a tough, hot climb and we were both exhausted by the time we got to the top.

We came across a sign that was a crossroads between sticking to the main trail or taking a spur to a viewpoint. Being tired it was tempting to say let’s skip the detour – boy were we glad we didn’t. The hidden viewpoint was only a few yards down this spur and the views were amazing – we were suddenly looking down on a deep valley with steep green cliffs climbing to a mesa. Breathtaking! It was actually a great place to catch our breath. Luckily the rest of the trail was largely downhill with many twists and turns along the way. Before reaching the parking lot there was another spur which took us down a trail along the valley with the green cliffs that we had looked upon earlier.

Along this trail, we were introduced to what the John Day area had become famous for – fossils. We were now flagging and feeling like a fossil ourselves. By the time we got back to our car we were totally dehydrated and needing some air conditioning – luckily down the road was a lovely cool building housing the National Park Service’s Thomas Condon Paleontology Center.

Thomas Condon, an early Oregon minister and self-trained scientist, was the first person to identify this region as a world-class paleontological site. Condon first learned of the areas abundant fossils from some soldiers in 1862 when he was minister at a church he had established in The Dalles, Oregon. In 1865, he visited the basin for the first time and started excavating fossils. It turned out that the fossils at John Day provide a complete record of the evolution of mammals from the dawn of time.

On reaching the Center we watched a movie on the Park – which was a mistake, as sitting in a dark room with a less than exciting video was very soporific (we have to apologize to anyone who was there about our snoring!) The Center itself was interesting (if you like fossils), more from the history of the area than necessarily the fossils themselves.

All that was needed now was some ice cream and beer. And that’s what we did – fortunately, there was a small shop in Dayville that served ice cream and filled beer growlers. By now we were exhausted and even the thought of eating was too much so we decided to head back to the mercantile for cheese and bourbon – a lethal combination.

Getting to John Day Fossil Beds

The National Monument is divided into units all of which are easily accessible from Highway 26 in Oregon. There are campgrounds throughout the area as well as accommodations in Prineville and John Day as well as the small towns of Mitchell and Dayville. 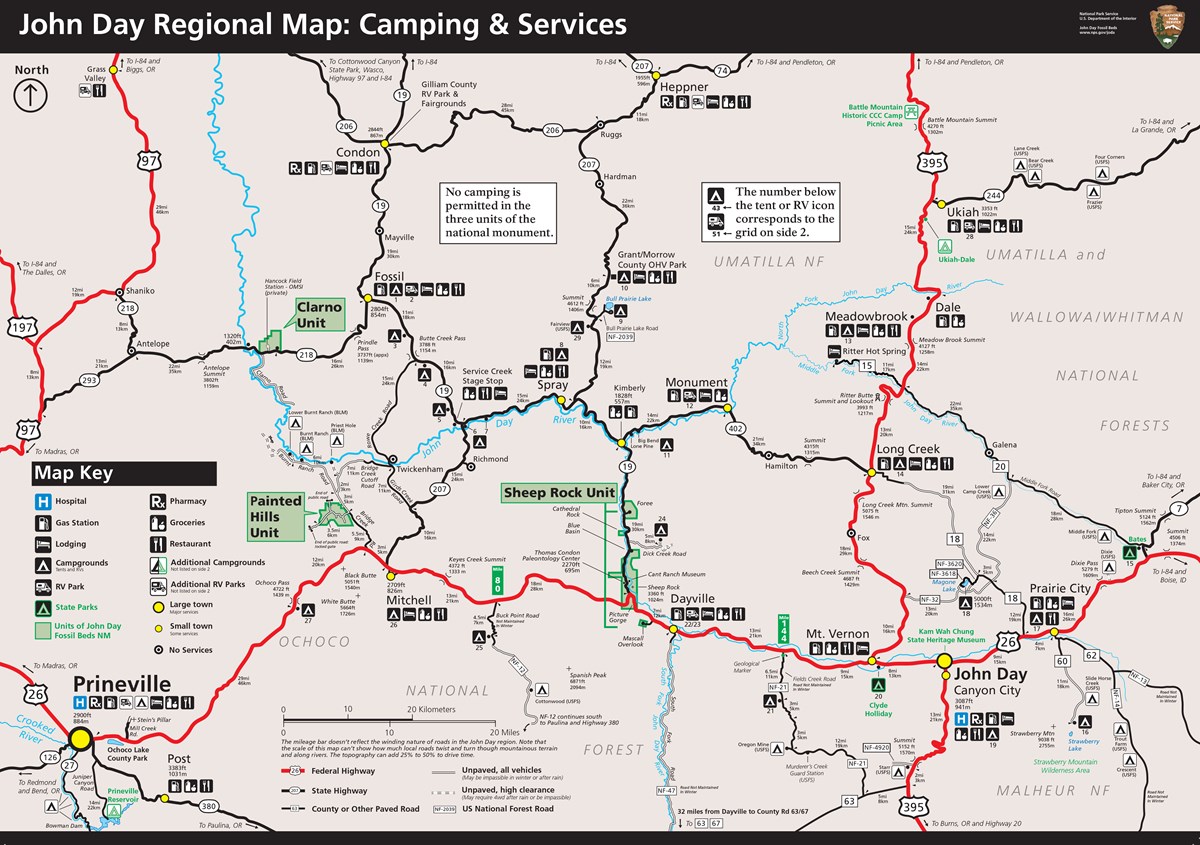 Malaysia: Borneo (Sabah) – A visit to the Sepilok Orangutan Sanctuary