Goldfield, Nevada at one time was the largest town in the State, fuelled by a gold rush. Today, its stately buildings have fallen into disrepair but the remaining 200 residents are trying to make the best of what they have

I have a great love for exploring bizarre and unusual, especially when I am travelling. I spend a lot of time, too much time my wife would say, researching the places we are visiting and looking up unique and interesting things to see. Sometimes we just come across places and things unexpectedly on our travels and one such place is Goldfield, Nevada.

We were en route from Reno to Las Vegas through Nevada’s high desert – expecting little (we had already discovered another little roadside gem in Hawthorne, Nevada) we rolled into Goldfield. Right at the start of the main street (there is pretty much only the main street) was a building covered in road signs and other funky items. I simply pull over for some photographs.

The history of Goldfield

The modest mining camp of Goldfield was originally established in 1902, and following a significant gold discovery in 1904, Goldfield became the largest city in the state of Nevada, and probably the wealthiest. At its height, Goldfield boasted a population of 30,000, three newspapers, five banks, a mining stock exchange, and what was most likely the longest bar in any mining town—Tex Rickard’s Northern Saloon, which required 80 bartenders to handle its customers. Rickard also managed to pull together the lightweight championship fight between Joe Gans and Oscar “Battling” Nelson. The fight took place in Goldfield on September 3rd 1906 and became the longest fight in modern boxing history lasting an incredible 42 rounds! Rickard went on to build the original Madison Square Garden in New York City.A monument celebrating the famous Gans – Nelson fight in 1906 & me shadow boxing!

By 1910 the mines went into severe decline and, as might be expected, so did the fortunes of Goldfield. Around 1,500 residents stuck around until a flash flood, followed by a devastating fire hit the town in 1923. Today, less than 200 people call this once-great town home.

This is the building that initially caught my attention, but it turned out to be several buildings that were covered not only in road-signs but other eclectic items including classic Americana, films props and industrial artefacts from the Industrial Revolution. The building stands on the site of the 1904 Mohawk Saloon, which burned down during The Great Moonshine Fire of 1923 that claimed over 52 blocks of the city.

Whilst I was snapping away Karen got talking to a gentleman, who along with his brother who actually own the property and was responsible for decorating it. The man, Mark Stezaker has worked in the film industry for years, supplying props and involved in productions. We had a long chat, sharing our histories and familial roots in the UK.

The main street building covered in movie props, signs and remnants of the Industrial Revolution

Not quite sure what this building is for

The side of the building is covered in roadsign

Along the main drag in Goldfield, you’ll find a small storefront with a small parking lot alongside. The lot is not huge but it is packed with a handful of cars that have been heavily modified and decorated. They are quite a sight and I could imagine you could spend hours looking over each vehicle in turn and find something new.

Across the street from the Court House is an abandoned house the has bottles embedded in its walls. At one time it was fashionable to construct your desert-dwelling with walls of discarded bottles glued together with a mixture of adobe and straw. This bottle house dates from 1905. 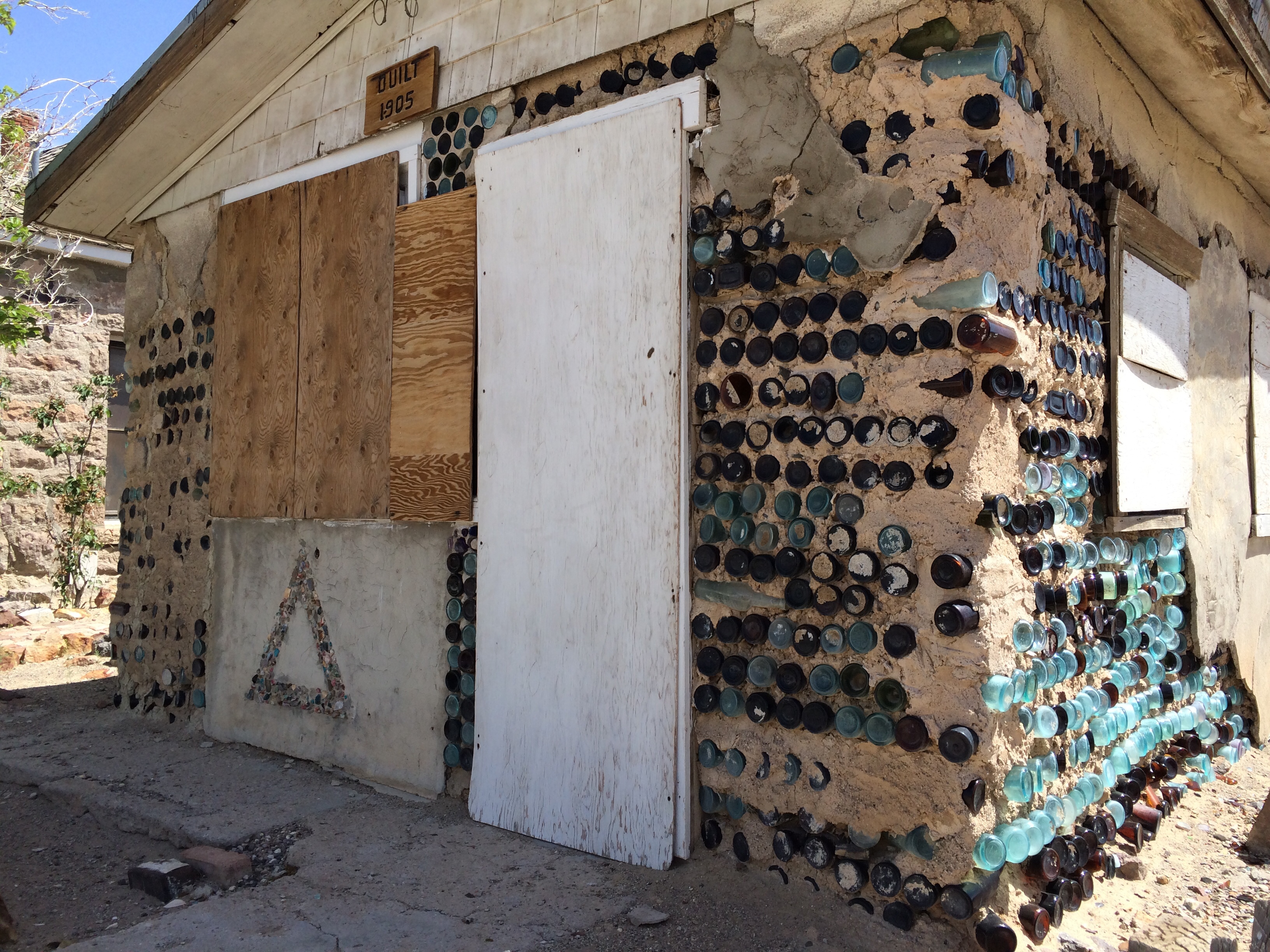 Originally built in 1908, the Fire Station was built during Goldfield’s infamous boom years and is found in the centre of town just off the main drag (or Crook Street). The building is one of the best examples of locally quarried ashlar stone construction in Goldfield, and miraculously, lasted over 100 years despite several catastrophic natural disasters.

The Goldfield Historic Fire Station is open by appointment only. To inquire about availability and schedule a tour, please call (775) 485-3560. Though admission is free, this museum depends on donations to continue preservation efforts, so please consider making a donation when visiting.

As we walked the streets of Goldfield we came across several vehicles, some whimsical and others in various states of repair. One of the good things about deserts there is not much rain so rust is less of an issue. The disused Shell garage along the main street has seen better days, but out back you will find an ambulance of sorts and other cars.

The courthouse in Goldfield, which still remains the Esmeralda County seat has been in regular use since its grand opening in 1908. The elaborate building, constructed of native sandstone, was one of the most intricate buildings of its time and still features original Tiffany and Co. lamps. Just beyond the courthouse is the original jail with three levels of metal cells.

If you’re looking for somewhere to wet your whistle then perhaps tryout the Santa Fe Saloon, which proudly claims to be the home of Nevada’s meanest bartender. Operating since 1905, the Sante Fe Saloon is Goldfield’s oldest continually operating business, and a glimpse into Gold Rush-era Nevada. The outside of the Santa Fe Saloon does not look too promising with its rough hand-painted sign but once inside and inside, you’ll find a spacious interior with rough floor planking and an original Brunswick bar.

There are several historic buildings in Goldfield that are in various stages of refurbishment. The old High School building is one of two of the original four schools built in Goldfield that are still standing. By 1907, renowned architect J.B. Randall’s design for a 3-story, 19,656 square foot building had come to life. The property featured 12 classrooms and had a seating capacity of 450. By 1918, all three of the other schools closed, and all grades were relocated to the Historic High School. By 1947, grades 9-12 were bussed north to the town of Tonopah, and only the lower grades used the ground floor classrooms. By 1953, the school was completely abandoned due to an increasingly weak foundation. The historical society has been diligently working to restore the High School building to its former glory, focusing much of its effort to stabilize and rebuild the outside of the building. They soon hope to begin work on the interiors. Today, it is possible to tour the High School building by appointment only, costing $20 for a 90-minute tour. For specific details about the tour, and schedule an appointment, please contact Jeri Foutz at (775) 485-3738 or (541) 218-8236.

The stand-out building in Goldfield is the Goldfield Hotel which sits right in the heart of the town. Originally opening in 1908, the Goldfield Hotel was said to have been the most luxurious hotel between Chicago and San Francisco. This hard-to-miss stone and brick building was equipped with the most unfathomable luxuries of the time, including telephones, electricity and a heating system. Said to have had champagne flowing down the entryway steps on opening day, the lobby was opulently decorated with rich mahogany, over-stuffed black leather furniture, gleaming gold-leaf ceilings and crystal chandeliers.

The hotel is reported haunted and has featured in many TV shows and documentaries. The ghouls said to inhabit the place include the former owner and mining magnate George Wingfield (it is said you can still smell the smoke from his cigars!). Other reported ghouls include Wingfield’s mistress and illegitimate child, two guests who committed suicide in the hotel, two children and a little person who are said to pull pranks on visitors, and “The Stabber,” who is said to attack people with a knife, although his ghostly attacks cause more fear than any real harm.

Radio Goldfield & Goldfield Gift Shop
A couple of other things worth checking out is Radio Goldfield which is located across the main street opposite the Goldfield Hotel. This local community radio station has a storefront, so you are likely to find the DJ of the moment doing ‘their thing’ for everyone to see. When we visited there was a very energetic middle-aged woman rocking it up – it is difficult to walk past without joining in!

In the same block as Radio Goldfield is the Goldfield Gift Shop. We like to contribute to local businesses, especially in small towns like Goldfield, where making a living is tough and dependent on people passing through, so we popped in to see what they had inside. The shop was packed with a cornucopia of local gift items, which seemed to date back to the original founding of Goldfield and a mish-mash of snacks, souvenirs and collectables. In the back of the store is a doorway into another room which is a museum dedicated to the Tonopah and Tidewater Railway, complete with a diorama of the railway network. I do love model railways! So, after selecting a couple of souvenir items we got talking to the folks who run the gift shop, Sherry, Diana, Elaine and Kevin, who gave us a little more insight into the history and culture of this former gold-rush town.

The International Car Forest of the Last Church is an art installation located just outside Goldfield. At first appearance, it looks like some druidic religious construct, akin to Stone Henge, but this is very different but does have it’s divine roots.

The Car Forest is the product of a collaboration between artists Chad Sorg and Mark Rippie which began around 2010. Today, over 40 automobiles including cars, trucks, and vans have been balanced delicately on their ends or stacked on top one of another, looking like a group of toys some giant child simply left lying around. Each of the junked cars has also been uniquely painted with designs varying from skulls to caricatures of politicians.

There is no sign explaining or naming the work, but its official name—the International Car Forest of the Last Church—was given to it by Rippie based on his religious belief that eschews organized religion. Unfortunately, the two artists no longer work together after an angry falling out at a party.

Nevada: Hawthorne – Ordnance Museum, a quirky tribute to the nearby Army Depot

Book Review – Kon-Tiki: Across the Pacific in a Raft by Thor Heyerdahl