During the 1940s, a man named Alex Jordan discovered a 60-foot chimney of rock in Wisconsin’s beautiful Wyoming Valley. It was here that he decided to build a house on the sandstone formation called Deer Shelter Rock.

Jordan built the house as a weekend retreat and never intended it to be a tourist attraction. However, people kept coming to see the architectural wonder they had heard about. Jordan eventually started asking for 50-cent donations. That was only the beginning. The 14-room house is the original structure of what is now a complex of many buildings, exhibits and garden displays.

It can take many hours to walk through the House on the Rock, and it’s nearly impossible to see it all in one day. Among the collections of collections within is the world’s largest carousel, boasting 269 carousel animals,  182 lanterns, over 20,000 lights, and hundreds of mannequin angels hanging from the ceiling all around it.

Alex was a collector all his life and enjoyed visiting museums; however, he did not want The House on the Rock to be a museum. He intended it to be much more than that. Though parts of the collections could have easily found their way into museums, The House on the Rock is more of a trip through the wild and fantastic imagination of Alex Jordan than a visit to a dusty, lifeless museum.

We had visited the House on the Rock several years back with the kids – but it is one of those places that you can keep going back to and still find new things.

The first place you come to in your tour is the Japanese Gardens, which are stunning in their own right.

After passing through the Japanese Garden the next place on the tour is the original 14 bedroom House on the Rock. This a truly weird and wonderful place, with its rooms snaking around the chimney rock. The rooms are small, low-ceilinged and cosy. Most external light enters the house from the stained glass windows – even on a bright day outside it is pretty dark in the house. This is not somewhere I could live, but each to his own. Jordan obviously loved Tiffany lamps so we can at least agree on this.

Another fascinating part of the original house is the Infinity Room. This 218-foot-long infinity room—which Jordan completed in 1985, a few years before his death—is legitimately impressive. Counterbalanced by many tons of concrete, it extends 140 feet beyond any supporting structure and 15 stories above the rolling hills and valleys below it. And yes, its 3,264 windows make for a truly stunning selfie backdrop. 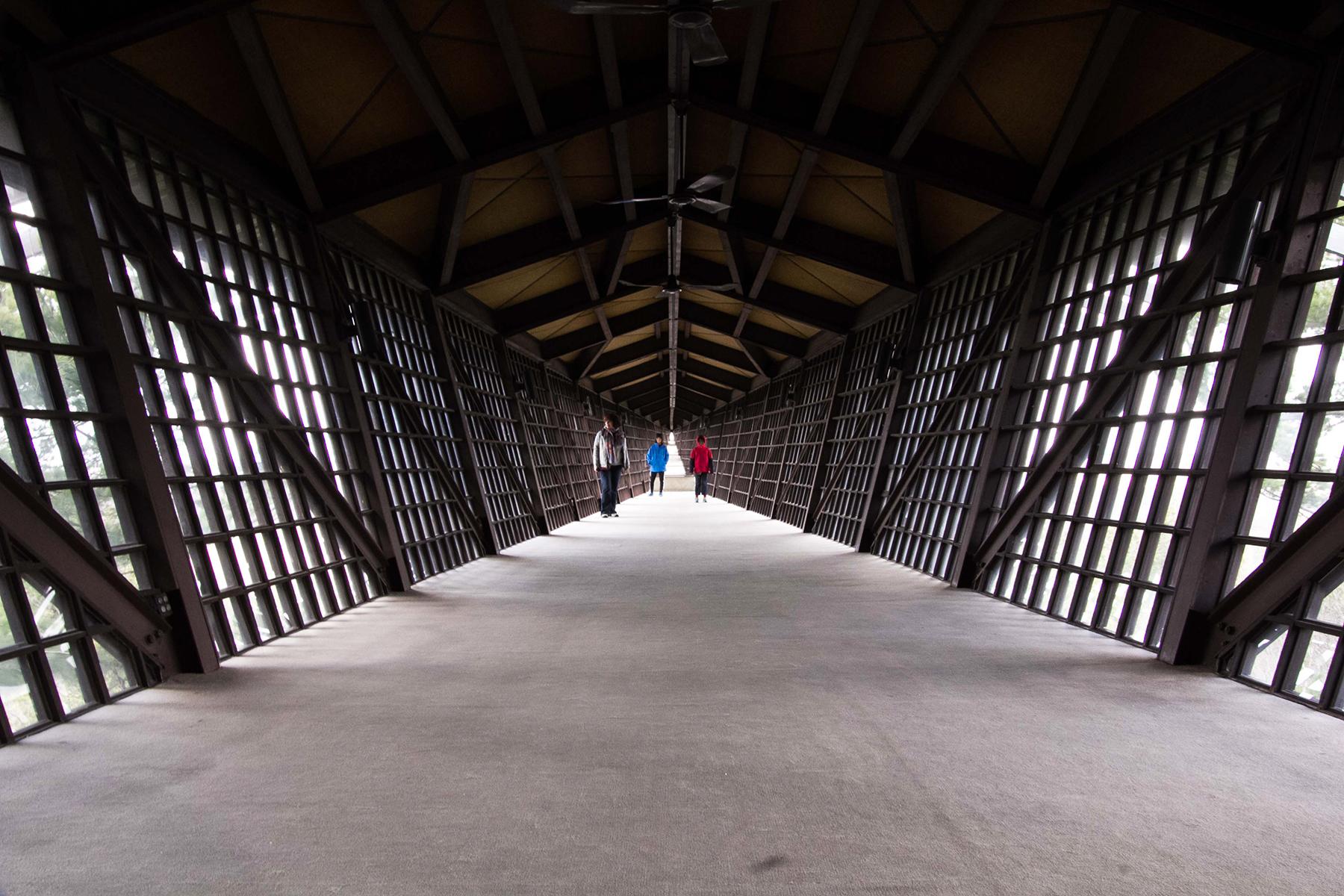 Scattered around the exhibitions of the House of the Rock are plenty of automatons – including full orchestras. These have to be seen to be believed. At the start of your visit buy some tokens and you can use them in many places throughout the collections to fire these amazing creations into life.

From the house, the tour moves on to visit the large buildings where the collections of Alex Jordan are housed. The buildings are large, they have to be to fit everything in. First up is section 2 which has the Spirit of Aviation, Music of Yesterday and the Streets of Yesterday.  It is difficult to really describe the experience of passing through these exhibits – it is epic and totally overloads the senses. A really indescribable, mind-blowing extravaganza!

The Streets of Yesterday takes you on a journey through a 19th-century red-bricked street lined by an array of shops containing a myriad of displays. There are several automatons that you can feed with tokens that play and amuse. If your mind is not blown away by this then it will be by the time you pass through the Music of Yesterday. Here you will find several incredible automated orchestral displays with musical instruments and pipe organs. It is really hard to explain exactly what these are like – I have included some videos just to give a sense of the incredible intricacy of these assemblies.

After these exhibits, you might feel the need to rest your brain, but there is still much more to see. The Heritage of the Sea is a more formal exhibit, spread across four floors, with metal walkways around the outside of each. At the centre of the exhibit hall is a huge (I mean huge) model of a whale battling with a giant squid. It is easy to just focus on the large model at its heart but the display cabinets have fabulous models of ships across the ages and an impressive collection of memorabilia from the history of sea travel, including from the Titanic and from sea wars.

The exhibits go on and on and on – including dollhouses, vehicles, weapons, tableaux of knights of old, ivory carvings – to name a few. It is the most amazing and eclectic exhibition that I have ever experienced. To be honest it is beyond my descriptive skills to explain the weird, bizarre and expanse of Alex Jordan collections – you really need to go there to experience it. It is one of the most incredible places I have ever visited.

There are many incredible things to see at the House on the Rock – but my favourite exhibits have to be the world’s largest carousel and the collection of carousel horses, and the fabulous Organ Room.

The carousel at the House on the Rock features 269 carousel animals, 182 chandeliers, over 20,000 lights, and hundreds of mannequin angels hanging from the ceiling. The carousel has no horses.

Hundreds of topless angels hang from the walls and dangle from the ceiling (Alex Jordan Jr. clearly had a thing for boobies). The only way to exit the room is by walking down the red-carpeted throat of a giant demon.

The Organ Room is something incredible – a mayhem of mechanical maniacism. Here you’ll find several large organ consoles belting out songs spookily without any organist in sight. This is steampunk heavenn with huge cogs and mechanisms, suspended in among large copper vats. The whole space is dimly lit and traversed by metal walkways and bridges. I love this place!

Both times I have visited the House on the Rock I have left mentally and emotionally exhausted. Even in the six or so hours I have spent there in total I don’t feel I have scraped the surface of exploring this place. It is easy to see why the House has inspired several authors and musical groups, the most prominent being author Neil Gaiman, who used it as an important plot point in his 2001 novel American Gods, along with the related 2017 television series.

If you are in Wisconsin and anywhere near the Spring Green area I strongly recommend you taking a visit to this amazing place.