During our visit to Mexico City, we travelled to the quaint suburb of Coyoacan, which as well as having a delightful centre is also the home of the National Autonomous University of Mexico (Universidad Nacional Autónoma de México or UNAM). Getting there from the heart of Mexico City is a little challenging but a combination of the metro, bus or Uber will get you there. We did this as part of a tour to Coyoacan and Frida Kahlo’s Blue House.

UNAM’s campus is a UNESCO World Heritage site that was designed by some of Mexico’s best-known architects of the 20th century. Murals in the main campus were painted by some of the most recognized artists in Mexican history, such as Diego Rivera and David Alfaro Siqueiros. The award of UNESCO status to the Central University City Campus of UNAM was a result of it being:

Founded in its modern form in September 1910 it obtained independence from government control in 1929, leaving it free to determine its own direction and define its own curriculum. It has developed strong research programmes across a diverse range of topics including robotics, computer science, mathematics, physics, human-computer interaction, history, philosophy, among others. All Mexican Nobel laureates are either alumni or faculty of UNAM.

The campus is vast and is more akin to a city. The main campus alone covers nearly 3 square miles and is home to more than 350,000 students.

Prospective students need only a high school diploma, proof of residency and a little luck. Applicants are assigned a number that is fed into a computer, which randomly selects the new freshman class.  In 2016, it had an acceptance rate of only 8%. There are no entrance exams at the Autonomous University of Mexico City. No checking of school records. No interviews. No financial aid forms, since attendance is free.

The university and its system of 16 feeder high schools were launched in 2001 by then-Mayor Andrés Manuel López Obrador (now President of Mexico).

My real interest in visiting UNAM was to see the murals. There are 10 murals in total spread throughout the main campus – sadly we only had time to see a handful.

Originally opened in 1956, the library building is the most prominent of the murals and is the work of renowned artist Juan O’Gorman. Though the building’s architecture is blocky, windowless, and monolithic, the artist created colourful designs that cover the entire surface of all four sides. The designs were inspired by a quartet of historical epochs, with the north wall representing the pre-Hispanic period; the south wall, the colonial period; the east wall, the modern era; and the west wall, the university’s history.

A highly symbolic mural covers the side of a Faculty of Medicine building at the UNAM. The mural is encircled by a rattlesnake, its forked tongue flickering between its fangs. The midsection of this gigantic serpent is shown to have burst into flames, from which rise tendrils of smoke. 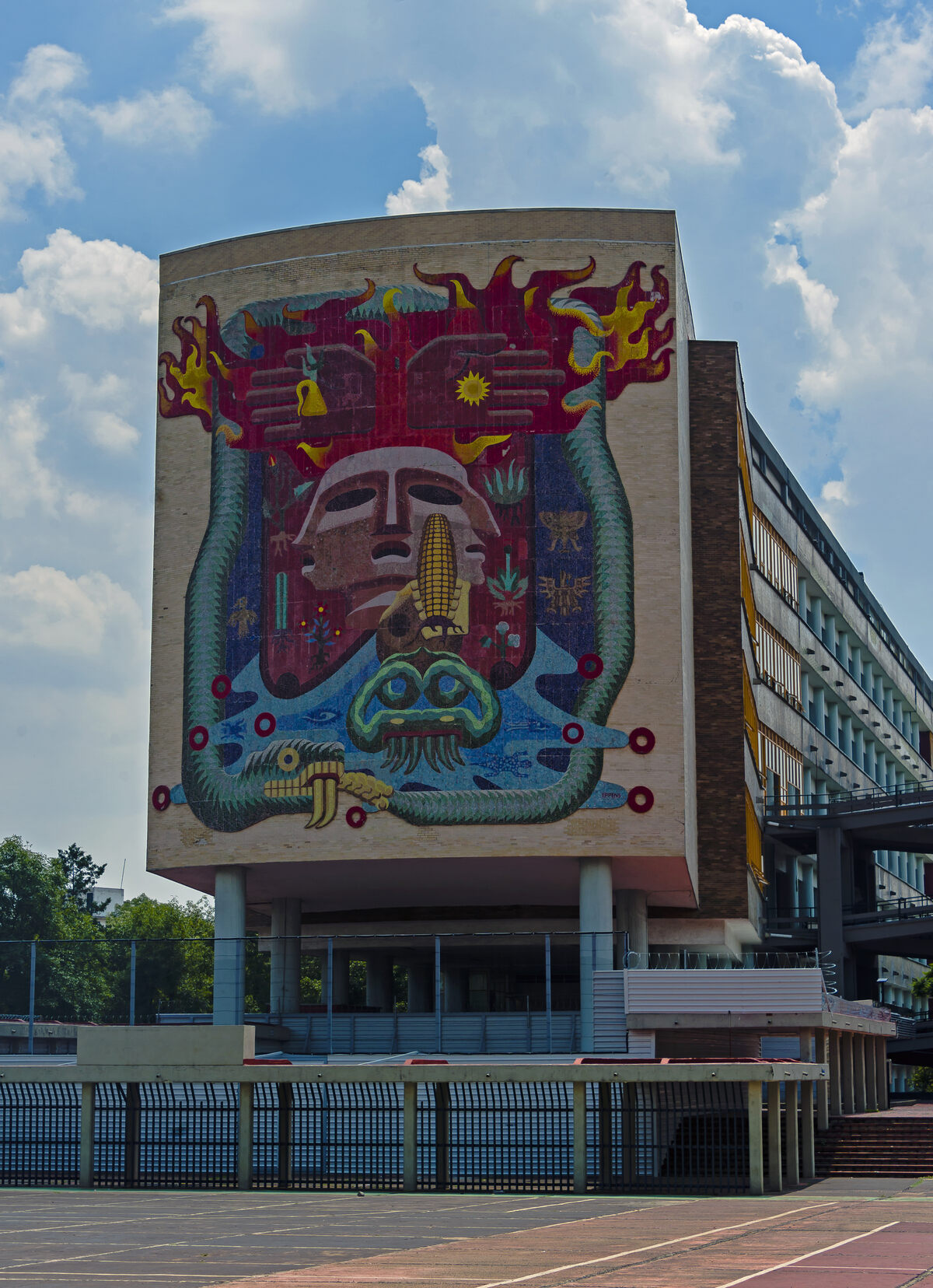 Above the entrance to the main administration building is a mural created by David Alfaro Siqueiros. The main feature of this mural is an imposing three-dimensional arm. There are several hands depicted, one with a giant pencil. To the left of these hands is a book, which lists critical dates in Mexico’s history: 1520 (the Conquest by Spain); 1810 (Independence from Spain); 1857 (the Liberal Constitution which established individual rights); and 1910 (the start of the Revolution against the regime of Porfirio Díaz). There is one date left blank to seeming to suggest that there is another great historic event yet to happen in Mexico’s future.

One of my favourite murals is painted in relief on the entrance to UNAM’s rectory. “The people to the University, the University to the people” is an impressive three dimensional mural by David Alfaro Siqueiros and depicts five students climbing stairs, carrying in their hands’ representative objects of the knowledge acquired in the university.

I was somewhat dubious as to why this University might have been awarded its status by UNESCO but having visited the murals alone convinced me it was deserved. I am not a big fan of modernist architecture – it is a bit too square and blocky for my taste – but the concept of the developing this University as a central pillar in an urban community is very impressive and it is clear to see how this establishment has made a major contribution to Mexico’s culture, academia and societal development.